How proficient are your people?

As a senior manager you probably have very high levels of awareness and technical expertise in your chosen field.  You can effortlessly make decisions that actually require reflecting on your vast experience, and sorting through millions of mental maps with various levels of complexity.  But what about your people?  What level are they at and what are the steps they need to take to get to the next level?  What are the steps you need to take to help them?

As I reflect on my first…

With the ructions in the ALP almost, finally, almost, sort of settled, it’s less than three months before we see the Coalition form Government.

The current Minister for Employment Participation, Kate Ellis, was a strong Gillard supporter and has criticized Rudd in the media. She is a ‘dead duck’ in the lead up to the election. Ellis has done a good job in the childcare portfolio but was almost a stranger to ‘selling’ Australia’s ageing population policies to employers and the…

Are you interviewing a leader or a bureaucrat?

There is a distinct difference between interviewing a candidate who has a formal leadership role and those candidates who do not.

When a candidate has reached a position of formal leadership, their technical skills become relatively less important to their ongoing success. The critical factor that has the candidate consistently deliver high performance in a leadership position is, overwhelmingly, their competency in establishing and developing effective relationships. Unless a leader… 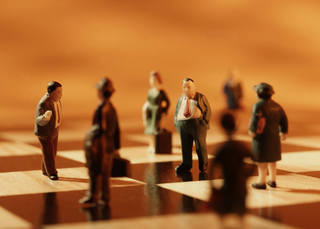 The current economic climate has forced some organisations to question whether they should reduce their workforce, and who to keep or let go. Those are not easy decisions for any employer.

Working with a professional outplacement…

Get Rid of The Outdated Long Hours Culture and Work Smartly

The next in my theme about the most difficult situations managers have to face, is all about changing that long hours culture and having the courage to embrace flexible working as a win/win concept. In week one I wrote about How to make Managing Poor Performance Easy, last week I tackled those …

5 Ways to Improve Communication with Your Employees

Arlene Chandler is a freelance writer who loves doing her part in creating happy and healthy workplaces. She currently writes career, business, and insurance tips for AAMI.com.au.

5 Ways to Improve Communication with Your Employees

In any situation where you’re working with people, success relies largely on communication skills; this is especially important in the workplace where daily responsibilities…

Are you getting the tension just right?

We clutter and overload our prefrontal cortex (the part of our brain that we use to think about stuff) with urgent things like mistakes and errors of others, deadlines and client calls.  These issues give us plenty of excuses for…

Talented candidates are in great demand and your competitors are wooing and seducing them right throughout the interview process.....are you?

Over the years, as a Professional Recruiter I have had the good fortune of working with some of the best organisations to implement clear and structured recruitment strategies, these strategies have helped them attract, on-board and retain some of…

A strategic redundancy process – how to make it above board, fair and respectful Although it will probably not be your decision to make redundancies, a key role for an HR manager is to ensure the redundancy process is strategic and above board.

Rather than implementing a random cull, an organisation should look at what’s successful and what’s not. It may be better to cut a less critical business unit…

MISCONCEPTION NUMBER ONE:   Avoid confrontation because it will make things worse.

People in teams avoid raising breakdowns, issues and matters of concern they have with their team members, and also with the team itself, as they fear that raising them will make matters worse. They live in the delusion that sweeping issues under the carpet makes them disappear and removes any significant impact on relationships and team dynamics.  This is the old 'ostrich with its head in the sand'…

The Rise and Rise of......HR Strategy

The rise and rise of…..HR Strategy…

One of the problems older job seekers face is trying to find positions on online job boards and in newspapers where the recruiters or employers don’t discriminate against them because of their age. There are a number of mature age online job boards but there simply aren't the jobs.

Adage has only listed about 20 jobs, Older Workers listed about 40 jobs and DOME in South Australia has about 50 positions (SA only, not for profit), with many repeats over the last six weeks. A large…

This week I’m continuing on my theme setting out some of the most difficult situations managers have to face. Last week I wrote about How to make Managing Poor Performance Easy, and this week I set out the steps I believe are essential to successfully hold those difficult conversations, which only become easier with experience and practice.

The worst kinds of conversation are those…

The Future of Leadership - Plan B

Richard Branson and Jochen Zeitz’s new global initiative entitled The B Team is delivering a ‘Plan B’ that puts people and planet firmly alongside profit.

Iconic leaders committing their organisations (and people) to the vision include…

On Friday 28 June the Fair Work Amendment Bill 2013 (Bill) was passed by both Houses of Parliament and received Royal Assent.

This article sets out a summary of the key amendments that the Bill makes to the Fair Work Act 2009 (Cth) (FW Act) and some recommended steps that businesses should take to prepare for the changes.

Background to the Bill

Sure they appear to be just a bit of paper lying around in a folder in the tea room or in a hidden in a file on the shared drive. BUT if they are also detailed, well written, read by staff and kept alive by management – they prove time and time again to not only guide employees & managers but to also provide sound support and evidence in cases of litigation.

Thanks to good HR Management and a sound, detailed…

'Creativity is intelligence having fun'.  Enjoy!…