The time to 'trust your gut' is lunchtime...

…not when you’re hiring a new staff member! Managers very often rely on their intuition or ‘gut feel’ when making staffing decisions.  In my experience, it’s amazing how often we hear  “it just felt right”, “she seems like a good fit” or “I feel very comfortable with him”.  There’s a lot of confidence in intuition.

When it turns out the…

Is Yours a High Performing Workplace?

A recent report* from the Society for Knowledge Economics (Sydney, October 2011) provides clear evidence that organisations that are attuned to the potential of their people and seek to utilise and develop their human resources not only enjoy a better ROI in the present, but are well positioned to maintain their lead in Australia’s future economic growth.

The study, involving 5661 employees across 78 organisations and funded by the Federal Government (DEEWR), found that High…

Dream employers survey points to self employment. Is it the road to work life balance?

While the survey has a healthy spattering of dynamic, young and young-focussed companies, for the last two years self employment has ranked at number two in the Dream Employer stakes.

The survey results show that…

Weekly meetings like groundhog day? 10 tips to spice them up Running an effective one on one meeting with staff is no easy task.  It is a leadership essential that has managers of people second-guessing their importance, relevance and benefit.  I know CEO’s who don’t even do them – leaving it to their direct reports to schedule time in their diaries if there is an ‘issue’ to discuss. Others cancel them on a regular basis, especially at…

What Kind of Organization Do You Work In?

In his 1997 article published in the journal ‘Organizational Dynamics’, Alan Frohman describes 4 types of organizations.  This article provides a discussion of some of the points he raises.

The first type of organization is the ‘Autocracy’.  Autocracies are ruled by CEOs that want to control everything that happens.  Staff are expected to obey the rules and conform to the policies handed down from above.  Innovation and creative thinking are not prized.  Workers recognise their lack…

Is Human Adaptability Your Friend or Foe?

It has been said that change is the only thing we can count on.  As change management consultants, Redequip™ passionately holds the view that people and organizations need to adapt to their environment to stay healthy and relevant.

Anthropology shows us that humans have generally been good at adapting to their environment.   We are one of the few species that have survived in almost any environment the earth has to offer - the…

OCM has been defined as “the process of continually renewing an organization’s direction, structure, and capabilities to serve the ever-changing needs of external and internal customers” (Moran & Brightman, 2001).   How this task is approached depends on your philosophy of OCM.

Your philosophy of OCM can be influenced by two different assumptions about change and how to manage it.  The first assumption can be represented by the following question: ‘How can we plan for change?’ …

Team building is out, team growing is in

The concept of growing a team instead of building a team has been around a long time. It seems to have started with Frederick P Brooks in his book “The mythical man-month” written over 30 years ago. He believed that the “building metaphor has outlived its usefulness” and that “the conceptual structures we construct today are too complicated to be accurately specified in advance and too complex to be built faultlessly, then we must take a radically different approach”.

In 5 years' time there will be no more resumes. Your LinkedIn profile or perhaps some other social networking site, will be your resume. So what do you need on there?

A photo of just you. Not with your partner or your kids, just a head shot of you, looking professional, not at the beach! If you don't have a photo on there, you need to get one - it is more appealing to future employers and LinkedIn users, as they can see a real person behind the words.

A tag line below…

Why do your best people leave you?

They say people join companies and leave managers. At Enigma HR we talk to a lot of people when they are looking to leave their jobs. While we’ve found this to be generally true, it's a pretty simplistic statement. So we thought we’d explore some research to dig deeper behind what makes people unhappy at work.

We've found some inspiration in some unusual places.

We're having a birthday this week - on Friday HR Daily is turning three! We're pretty excited about this and are celebrating by launching some new offerings.

One of these is HRD+. This new section of the HR Daily website will feature premium content in the form of employer case studies, podcasts and streamed webinars - a broad selection of HR learning materials that you can access online and on-demand.

You can check out our subscription rates…

The 12 quickest ways to breach trust with your new employees

Compiled from many conversations we’ve had with new employees, we present you some tales from the induction front battle lines.

Here’s our checklist of the 12 fastest ways to breach trust with your new employees.

We could have called this blog post the poor employer’s induction checklist – 12 things you must never ever do on day one, or any other day for that matter. In fact, let’s do that. Drum roll please………

Employee Retention: How to Crack the Code

What I’ve learnt over the years is that there is no one secret ingredient to retaining staff. In my early days of running a business, I had high staff turnover and it used to drive me crazy the amount of money, effort, time and emotional energy I would invest in new recruits only to lose them within a 12-month period. A realisation that people are at the core of business…

The benefits of SQ and EQ in business

Intelligence comes in many forms, including academic, social and emotional. All three of these have an impact on an individual’s life and success in their career. While most people have a high regard for someone who is academically astute, social and emotional intelligence can have just as much impact and are recognised as being desirable traits for a successful leader.

First up, an explanation of…

I just came across this comic and thought you'd all enjoy it... 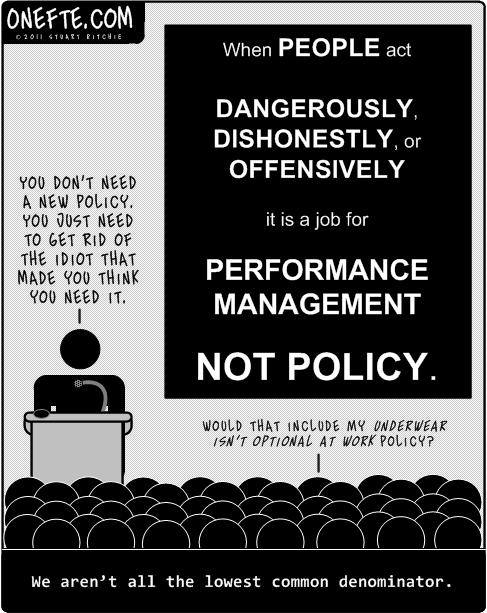